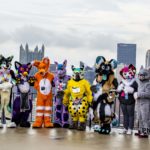 “Where do you go when you need to purchase thousands of twenty-inch paper straws?” This was the question that Sam Conway from Anthrocon asked himself when he decided it was time to ditch the plastic straw. After years of buying huge quantities of plastic straws for the Anthopomorphics Conventions, he suddenly realized that these plastic straws would be around in the environment long after he is gone. It was time for a change.

Due to the nature of the costumes that the attendees wear, completely abandoning the straw was not an option, so Sam had to find a suitable alternative. How hard can it be to do a quick Google search and place an order? However, he quickly discovered it was a little more challenging than at first anticipated. After contacting many suppliers, throughout the world with no success, Sam eventually found us, ‘The Paper Straw Group.’

Never prone to shy away from a challenge we were excited to work with Sam to produce his bespoke paper straws. We initially made some prototype 20-inch straws which Sam took to a convention in Berlin and the feedback was positive.

We are now working with numerous convention leaders around Europe to produce their bespoke 20-inch straws.