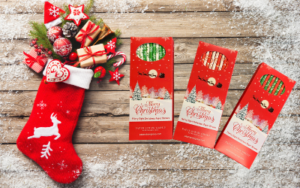 It is a tradition that we all look forward to every year, the humble Christmas stocking. On Christmas morning children excitedly open their stockings to see what Father Christmas has brought them. Traditionally, stocking fillers were a variety of small, treats which were fun and relatively inexpensive. These days many parents now give toiletries or little games as well as sweet treats and chocolates.

If you are looking for inspiration this year as to what to include in your stockings, why not include some branded or personalised paper straws. These are a great present as they are inexpensive and unique. You can include any message or branded logo with the added benefit of knowing you are giving a responsibly sourced gift. Our paper straws are completely plastic free, recyclable and biodegradable. There are also made in the UK.

We have an amazing range of paper straw games. There are four versions available to buy on our website, the Truth or Dare Straw Game, Kid’s Trivia Straw Game, Would you rather Hen Party Straw Game and the Family Party Straw Game. These would make great stocking fillers for all the family and can then be enjoyed and played around the table with Christmas dinner and drinks.

The stocking filler tradition is thought to originate back to the time of Saint Nicholas. While there are no written records, there are many popular legends that attempt to explain the origins of the tradition.

One version tells the story of a wealthy merchant who had fallen upon hard times. He had three daughters and was worried about their future, as he was unable to afford a dowry to marry them off.

Saint Nicholas had heard about his plight and wanted to help the man. So, the legend says that he rode his white horse by the merchant’s house one night and tossed three bags of gold coins down the chimney of their house. As the girl’s stockings had been hung by the fireplace to dry, the bags of coins are caught in the stockings. The next morning the girls are overjoyed to discover the coins and they go on to marry and live happily ever after.

As word spread, children began hanging their stockings by the fireplace in the hope that they too would receive gifts from Saint Nicholas. So, don’t struggle for ideas this year, visit our website and order your own truly unique paper straw stocking fillers.