Why are Plastic Straws so Damaging to the Marine Environment? 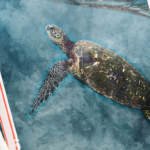 Today it is estimated that in Britain we use around 8.5 billion plastic straws a year.  A disposable item that is used for an average of twenty minutes, will remain on the planet forever. This excessive use of plastic straws is causing great damage to the environment, specifically the oceans. Every year an estimated 8 million metric tonnes of plastic enter our oceans. This means that by 2050 there will be more plastic in the ocean, than fish.

So why are plastic straws so bad? Well to start with, they are difficult to recycle. As they are so small and light, they frequently drop out of sorting machines and mix with other materials. Despite being made of plastic, which can be recycled, due to the vast quantities being used across the globe, they end up in the ocean as a result of human error. They are littered, left on beaches, blown into the ocean by the wind, or they find their way into the oceans through plugholes and drains. Plastic straws feature in the list of top 10 items found in costal clean-ups. Some plastic straws also contain BPA, which cannot be recycled. BPA is an industrial chemical that has been used to make certain plastics since the 1960’s.

In 2015, marine biologist, Christine Figgener, shot the now-infamous video of a plastic straw being pulled out of a turtle’s nose. While this video motivated many people to ditch plastic straws, turtles are not the only animals impacted.

Plastic does not biodegrade, it breaks down into smaller pieces called Microplastics, which are even more dangerous to marine life. According to StrawlessOcean.org, around 71% of seabirds and 30% of turtles have been found with plastic in their stomachs. Once plastic has been ingested, marine life has just a 50% chance of survival. Many aquatic animals tend to eat plastic trash and ingest the microplastics as the fragment can be less than 5mm.

Microplastics have even been found in fish and shellfish intended for human consumption. They can also be ingested through the whole food chain, from zooplankton up to seabirds and whales. Research has also shown that they can adversely affect growth and reproduction.

According to The Marine Conservation Society, microplastics in the marine environment can carry organic micropollutants such as nonylphenols (an endocrine disruptor), as well as secondary pollutants adsorbed from seawater such as Polychlorinated biphenyls (PCBs) and Dichlorodiphenyldichloroethylenes (DDEs). These toxins could potentially be passed into animal tissue and up the food chain to us as seafood consumers. It has been estimated that an average European seafood consumer ingests 11,000 plastic particles a year.

The full consequences of this for human health are not yet fully understood, although a recent study states ‘while knowledge of the environment and human health impacts, and the associated costs, is far from complete, there is already a strong case to act.’

Our paper straws are 100% plastic-free. Some of the paper straws that are imported from China have microplastics in their glue. We have made sure that the glue we use contains absolutely no plastic. Our straws are completely biodegradable, they can be composted or recycled. Should the unthinkable happen and our straws find themselves in the ocean, they will not harm the marine environment as they will biodegrade within six to eight weeks.

Armed with this information, let’s not wait another moment, make that change and the world will thank you for it.